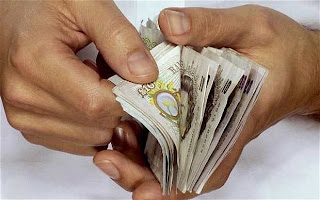 You need a new washing machine and you need it now! Who is offering the better deal - the guy who says you can pay the full price on delivery, or the girl who offers a 20% discount for cash payment upfront?

If you don't have the cash, you might think that you have no option but to pay the full price on delivery. Or you might figure that you could borrow the money, pay cash, collect the 20% discount, then repay what you borrowed, and still be ahead. If you actually have the cash on you -  it's a no brainer!

When ExxonMobil boss, Rex Tillerson, acknowledged man-made global warming but said society will adapt, he was selling the line that paying for goods after they are delivered is a good idea.  This is a line that benefits ExxonMobile because it lets them keep making money selling fossil fuel while the cost of dealing with the consequences is borne by society.

The costs of paying for the consequences of climate change became more apparent this year as we counted the cost of recovering from drought,  storms and flooding.  For example, Superstorm Sandy  caused an estimated $50 billion worth of damage to the New York region.

Economists say that whatever happens we can't escape the costs of damage caused by rising CO2 emissions. The stark benefit of paying upfront is that this is the only way to avoid the worst extremes of climate change. If we don't pay upfront, we risk average temperature increases of 4-7C by the end of the century. The World Bank warns -


A global temperature increase of about 7 degrees will lead to “unprecedented heat waves, severe drought and major floods in many regions, with serious impacts on human systems, ecosystems and associated services.”

So, how much is the upfront payment option? About 0.1% of GDP over 40 years, according to Treasury modelling for Australia's carbon price legislation.

That sounds like a deal you'd want to snap up.

Abu Dhabi: The largest single-unit solar power plant in the world is expected to be completed by the end of 2012 and officially open in the first quarter of 2013.

Email ThisBlogThis!Share to TwitterShare to FacebookShare to Pinterest
Labels: cost, discount, mitigation
Newer Posts Older Posts Home
Subscribe to: Posts (Atom)
Living in the harbour city where the bridge is the 'coathanger' and a blocky new harbourside building was dubbed the 'toaster', I know the power of a visual metaphor.