Collapse: How Societies Choose to Fail or Succeed, by Jared Diamond. This is a classic work that sets a solid foundation for recognising the forces that underpin the success and failure of civilisations.

Franke James is a Canadian artist who has produced some wonderful visual essays that advocate action on climate change.  Her imagination throws up images of Alice searching for sense in an upsidedown world and politicians framed as Francis of Assisi. 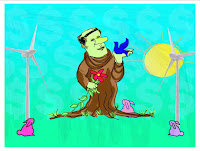 In The World Without Us, Alan Weisman visits real world locations that have become no-go zones for humans to see how the natural world gets on without us. He doesn't go to deserts or mountain tops, instead he visits places that humans have occupied and abandoned: Cyprus, Chernobyl, the Korean Demilitarized Zone and others. Written largely as a thought experiment, the book outlines, for example, how cities and houses would deteriorate, how long man-made artifacts would last, and how remaining lifeforms would evolve. Weisman concludes that residential neighborhoods would become forests within 500 years, and that radioactive waste, bronze statues, plastics, and Mount Rushmore would be among the longest lasting evidence of human presence on Earth.

Add comment
Load more...
Home
Subscribe to: Posts (Atom)
Living in the harbour city where the bridge is the 'coathanger' and a blocky new harbourside building was dubbed the 'toaster', I know the power of a visual metaphor.