Bailing with a thimble 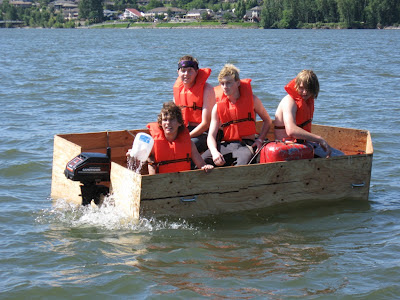 Who are these intrepid sailors in their home-made boat?

They certainly have good team spirit. You can hear snatches of their team song.

Our little boat is flimsy, the rush of waters strong,
The mighty River Science carries us along.

They like to think of themsevles as scientists, though they don't collect data. Instead, they spend their time picking over the details of other people's science. Without serious skills in maths or any of the science disciplines, at best they are "backyard tinkerers".

They tend to hang out together in online forums and blogs where they sing songs of mutual solidarity, bound together by opposition to mainstream science.

But we’re not going lightly, we know that they are wrong.
Paddle harder boys and join me in our song.

They are the the oddball world of climate change denial, fighting a rearguard action against the massive flow of evidence for anthropogenic global warming (AGW). They put a brave face on their efforts to save the world from mainstream science.


Bailing with a thimble,
Paddling with a toothpick
Our minds and hearts are nimble
Their Science makes us sick.

Perhaps it was nausea that caused one of the sailors aboard the little boat Denial to fall overboard this week. After their own-goal with the Unabomber billboard, the Heartland Institute announced that they don't have the funding to continue running their deniala-palooza conferences.

We would laugh at the little boat Denial, paddling against the mighty flow of River Science, if they were harmless. The trouble is, there are a few of them bumping around in the river, spreading lies and confusion.  Some are paddling to the tune of "It's not happening" while others are paddling to various different beats like "It's happening but it won't affect us" or "Go slow, we just don't know".

They're going around in circles, but they've managed to create doubt and apprehension about the transition to a low carbon future.

It helps if we recognise that their 'toothpick and thimble' approach to science is fairly useless. This may discourage others from getting aboard the little boat Denial.

Posted by Gillian King at 3:00 PM No comments:

Email ThisBlogThis!Share to TwitterShare to FacebookShare to Pinterest
Labels: bailing, boat, denial, paddling, science, thimble, toothpick
Older Posts Home
Subscribe to: Posts (Atom)
Living in the harbour city where the bridge is the 'coathanger' and a blocky new harbourside building was dubbed the 'toaster', I know the power of a visual metaphor.