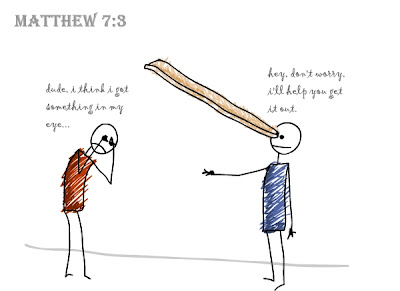 We have set out on this long journey towards a low carbon future.

We know that the cost of doing nothing will be enormous in money, goods, homes and lives. So we are prepared to pay to avoid catastrophe. Of course, we don't want to pay more than we have to, and we don't want to pay more than the other guy. So everyone is busy with their calculators and measuring rods making sure we pay as little as possible, making this transition look like a slow bicycle race.

The situation is ripe for vested interests to say, "Hey! Those guys are getting too much money. It's not fair."

This happened recently with respect to Chinese solar panels exported to the U.S. The U.S. Department of Commerce decided that the manufacturers had an unfair advantage due to big subsidies from the Chinese government. To level things up, they slapped a tariff on them.

Fossil fuel industry supporters often complain that governments are giving too many subsidies to renewable energy projects. Industry associations and lobbyists are counting on their fingers and toes to tally all the subsidies, big and little, for renewables.

The very reputable International Energy Agency (IEA) found that countries worldwide paid $66 billion in subsidies to encourage the development and deployment of renewable energy in 2010.

That sounds like a lot, but it is just a speck compared with the $409 billion that governments paid to subsidise fossil fuel in the same year, according to the IEA. 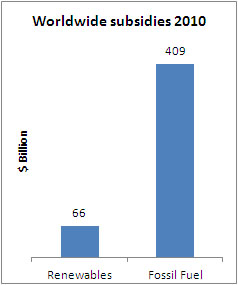 
Energy markets can be thought of as suffering from appendicitis due to fossil fuel subsidies. They need to be removed for a healthy energy economy. Energy is significantly underpriced in many parts of the world, leading to wasteful consumption, price volatility and fuel smuggling. It's also undermining the competitiveness of renewables.


Australia doesn't get a mention in this very excellent Guardian article about fossil fuel subsidies, but I note that after floating the idea of reducing the $2 billion diesel rebate, the Australian government caved in to industry lobbying and it didn't get a mention in the recent budget.

When fossil fuel interests criticise the subsidies given to renewable energy, they need to look at the log in their own eyes before complaining about the speck in other people's eyes.


You hypocrite, first take the log out of your own eye, and then you will see clearly to take the speck out of your brother’s eye.

Posted by Unknown at 3:57 PM No comments:

Email ThisBlogThis!Share to TwitterShare to FacebookShare to Pinterest
Labels: bible, cost, fatih-birol, fossil fuel, IEA, renewables, speck, subsidies, tariff
Older Posts Home
Subscribe to: Posts (Atom)
Living in the harbour city where the bridge is the 'coathanger' and a blocky new harbourside building was dubbed the 'toaster', I know the power of a visual metaphor.