Canary in the coal mine 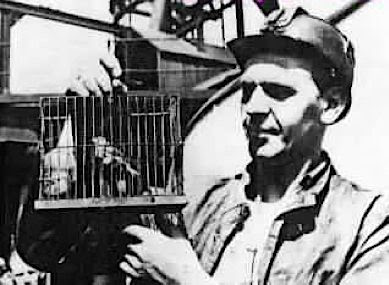 Methane is a deadly, odourless gas that seeps out of coal mines. Today, these are called 'fugitive emissions' and the escaping methane is one of the worst greenhouse gases.

It is largely due to the fugitive emissions from its coal mines that CO2-e emissions of Queenslanders are twice the rate of Australia overall.

Escaping methane is deadly for underground miners, so they implemented an early warning system that alerted them when they hit a pocket of the odourless gas. They took canaries down into the coal mines. The small birds are very susceptable to methane and after a few whiffs they keel over. When their little friends stopped singing, the miners beat a hasty retreat and many human lives were saved.

And so we got the English expression for an early warning system – the canary in the coal mine.

As the most dramatically visible effect of global warming, the rapid retreat of Arctic sea ice is often interpreted as the canary in the mine for anthropogenic climate change.


The ongoing rapid retreat of Arctic sea ice is often interpreted as the canary in the mine for anthropogenic climate change. In a new study, scientists have now systematically examined the validity of this claim. They find that neither natural fluctuations nor self-acceleration can explain the observed Arctic sea-ice retreat. Instead, the recent evolution of Arctic sea ice shows a strong, physically plausible correlation with the increasing greenhouse gas concentration.

Gretchen Hofmann, associate professor of biology at the University of California, Santa Barbara, warns that pteropods, tiny marine snails the size of a lentil, that she refers to as the "potato chip" of the oceans because they are eaten widely by so many species, are endangered by ocean acidification. A collapse in pteropods would make them a canary in the coalmine of climate change.

Early warning systems demand rapid and decisive responses. What are nations and individuals doing in response? Could we act faster, more decisively?

Posted by Gillian King at 9:15 AM No comments:

Email ThisBlogThis!Share to TwitterShare to FacebookShare to Pinterest
Labels: arctic ice, canary, coal, methane
Older Posts Home
Subscribe to: Posts (Atom)
Living in the harbour city where the bridge is the 'coathanger' and a blocky new harbourside building was dubbed the 'toaster', I know the power of a visual metaphor.