The meek shall inherit the earth 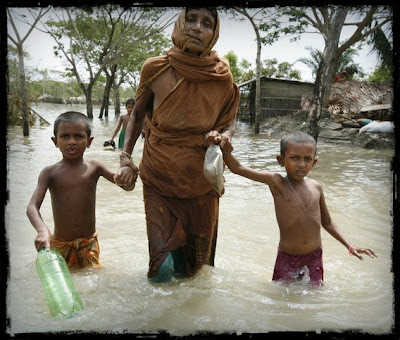 Maryanne is the wife of a friend of mine. A few years ago, she and her sister were deeply affected by the death of their mother. Although they had children of their own, they seemed to mourn their mother for years. I wondered what kind of woman she was and began to picture a person with special qualities, a paragon of virtue - love, charity, generosity? Or maybe she was eloquent, or gifted, or a passionate activist?

Some time later I had the chance to ask my friend about his mother-in-law. He said she was a rather meek woman who was bullied by her husband.

Suddenly I saw that this was a case where enduring love and commitment were aroused by frailty not by strength.

This got me thinking. We look for leaders who are strong and confident, and we forget that the most powerful moral force is exerted by the frail and the weak. They arouse our protective love.

Right now, the world looks to rich and powerful countries to lead the way on climate change. We have applauded European countries for their clean energy initiatives and we desperately want the U.S. to step forward and lead us to the new clean energy future.

Our disappointment in their recalcitrance feels like ashes in the mouth.

But how uplifting to see that the poorest countries are speaking out. Listen to this bold promise from Bangladesh. It promises unilateral action with no caveats, no ifs or buts.


Let me affirm that Bangladesh, as a responsible member of the international community, will never exceed the average per capita emission of the developing countries. This is our commitment to a low carbon development path.

We expect such commitments and responsible behavior from those who have contributed most to climate change crisis over decades. It is time for them to act positively in the interest of present and future generations.

More than most countries, Bangladesh knows the impact of climate change. They have 100 million people who will be homeless when sea levels rise by one metre in the next 1-2 generations. They're not standing back helpless, they are demonstrating the kind of action that is needed from all of us.

They are offering their widow's mite. If we count the value of a gift not by how much is given, but by how much is kept back we see the generosity of Bangladesh in promising to limit their per capita carbon emissions to the average of developing countries.

We open our hearts to the fragility of life in Bangladesh. Their honest promise calls us to action so that 100 million peaceful Bangladeshis can have some land to inherit.

Australia will join the Climate and Clean Air Coalition, a U.N.-led initiative to cut short-lived climate pollutants such as soot and methane. Other countries that have joined the initiative include major emitters such as Germany, Japan, the UK and the U.S, and developing nations such as Bangladesh, Ghana and Nigeria. Source: Reuters.

Email ThisBlogThis!Share to TwitterShare to FacebookShare to Pinterest
Labels: Bangladesh, leader, meek, sea-levels
Older Posts Home
Subscribe to: Posts (Atom)
Living in the harbour city where the bridge is the 'coathanger' and a blocky new harbourside building was dubbed the 'toaster', I know the power of a visual metaphor.