Yin and yang of clean energy 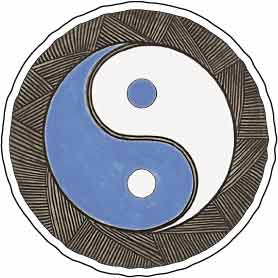 
We want solar to be the green energy that the common man can use. It’s not like oil, solar is a harmonious resource, a peaceful resource.

In these words, I hear echoes of the ancient teachings of Taoism which promotes harmony or union with nature, virtue and self-development.

China has a long cultural history where patience is a core value, so I am interested to see that their forward planning gives prominence to clean energy. China plans to spend $27 bn in 2012 to promote energy conservation, emission reductions and renewable energy.  Their goal is to reduce emissions by 40-45% by 2020, compared with 2003 levels, and boost use of renewable energy to 15% of overall energy consumption.

Its deep history gives China a long term perspective. In contrast, many Western democracies have relatively new national identities and seem driven to make their mark quickly. Western cultures are impatient for results. When we encounter obstacles we sometimes want to crash through, or change course.

Li Junfeng, a senior policy official, brings a different perspective in this comment about difficulties encountered by fledgling solar and wind industries.


Our industries are still very young. A child will stumble as he walks, because he’s still young. But eventually he will grow up.

This reminds me that solar power has been described as the teddy bear of renewables because it is small and lovable. What will it be when it grows up? A 360kg grizzly?

This graphic from the Financial Times shows how China's fledgling wind industry compares with that of the USA (click to enlarge). 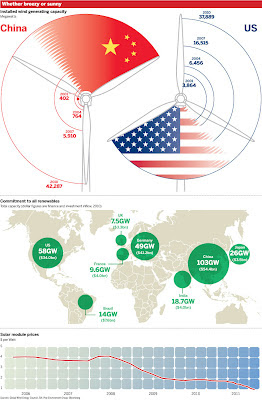 Email ThisBlogThis!Share to TwitterShare to FacebookShare to Pinterest
Labels: China, renewables, taoism, yin-yang
Older Posts Home
Subscribe to: Posts (Atom)
Living in the harbour city where the bridge is the 'coathanger' and a blocky new harbourside building was dubbed the 'toaster', I know the power of a visual metaphor.