From a mass of social media platforms, Twitter and Facebook have emerged as dominant players. Using them, climate communicators are finding fresh ways  to spread messages and organise action. Watch Twitter on 18 June for the Twitterstorm campaign that calls for the Rio Earth Summit to address the problem of fossil fuel subsidies.

Wealthy OECD countries are not the worst offenders, instead Iran, Saudi Arabia and Russia have the highest subsidies, as this Guardian graph illustrates. 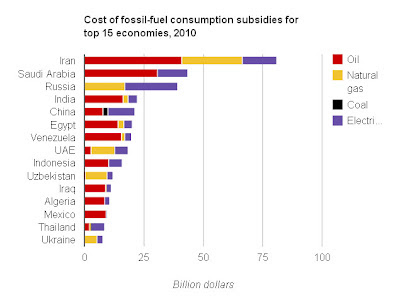 Countries with fossil fuel reserves, like Iran and Saudi Arabia, use subsidies as a way to spread the wealth by making fuel and fertiliser cheaper. However analysis has shown that little of the subsidy reaches the poorest people, and that there are more efficient ways to spread the wealth.

The worst effect of fossil fuel subsidies is to discourage the uptake of renewables because it is hard for clean energy to compete against artificially cheap fossil fuel.

Organisations like 350.0rg are using Rio's Earth Summit to advocate for wealthy countries to remove their own subsidies and to give assistance to poor countries so they can reduce theirs.

You can add your voice to campaign petitions at 350.org, or Earthday Network. And you can join the Twitterstorm planned for 18 June 2012 by following #endfossilfuelsubsidies.

It's a storm caused by fossil fuel emissions, but it's a good one.

UPDATE 20 June 2012: The Twitter campaign took the hash tag #endfossilfuelsubsidies to No. 2 in the ranking of globally trending topics and No. 1 in the US, and succeeded in mobilising action from tens of thousands of people worldwide.

The Twitterstorm was one element in a suite of related activities – petitions signed by more than 1 million people, banners, screen projections in major cities, and a panel discussion in Rio before the conference.

Among the cacophony of messages at the Rio+20 Earth Conference, the Twitterstorm may have helped to draw attention to fossil fuel subsidies. Early drafts of the Rio text didn't mention oil, coal or gas subsidies at all, and the final draft made only a passing reference. In the end, the impact of this Twitterstorm and the wider campaign will be measured by how quickly fossil fuel subsidies are unravelled over coming years.

Posted by Gillian King at 6:58 AM No comments:

Email ThisBlogThis!Share to TwitterShare to FacebookShare to Pinterest
Labels: fossil fuel, Rio, subsidies, twitter
Older Posts Home
Subscribe to: Posts (Atom)
Living in the harbour city where the bridge is the 'coathanger' and a blocky new harbourside building was dubbed the 'toaster', I know the power of a visual metaphor.