The Economy is the Pied Piper 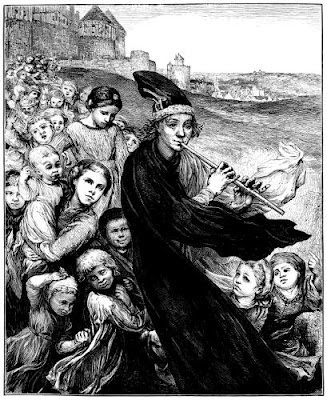 Those who claim that our economy can't afford to replace fossil fuels with renewables are mesmerising us with lies and leading us to a wasteland, just as the Pied Piper led the children of Hamelin off into the wilderness.


For he led us, he said, to a joyous land,
Joining the town and just at hand,
Where waters gushed and fruit-trees grew,
And flowers put forth a fairer hue,
And everything was strange and new;
The sparrows were brighter than peacocks here,
And their dogs outran our fallow deer,
And honey-bees had lost their stings,
And horses were born with eagles' wings.

The glittering promises of a joyous future based on coal, oil and natural gas are as real as the Piper's promise of sparrows as bright as peacocks.

Every credible economic advisor says that tip-toeing around carbon emission reduction will cost more in the long run. Here's what the very excellent Australian Treasury (the guys whose advice has made Australia the stand-out OECD economy) says.


Early global action is cheaper than delayed action. For economies like Australia, deferring action on climate change will only lead to higher long-term costs as emission-intensive technology, processes and outputs are locked in.

Nevertheless, we have governments that seem to be mesmerised by a magical Piper as they continue to subsidise fossil fuel industries and give permits to new coal mines, oil wells, and gas wells as though fossil fuels are not destroying our future with their carbon emissions.

In Australia, we have a government that brought in a carbon price of $23/tonne based on a world where CO2-e emissions can rise to 550ppm. Yes, 550ppm, not the 450ppm that gives a 75% chance to keep average global warming within the 2°C guardrail, and not the 350ppm that many credible scientists recommend as the maximum for a safe climate.

When will they wake from sleep and understand that countries can't be run to the misbegotten tunes of economists? As we come ever closer to the absolute resource limits of a finite planet, some economists are beginning to realise that growth economics is a fantasy.


So, don't be taken in by those who say that the 'joyous land' of the future will be based on coal, oil and natural gas. Recognise them for what they are - persuasive folk who spin yarns about horses born with eagles' wings.

In the Pied Piper of Hamelin, Browning describes how government officials responded when the Piper claimed his fee for ridding the town of rats.


A thousand guilders! The Mayor looked blue;
So did the Corporation too.
For council dinners made rare havoc
With Claret, Moselle, Vin-de-Grave, Hock;
And half the money would replenish
Their cellar's biggest butt with Rhenish.
To pay this sum to a wandering fellow
With a gipsy coat of red and yellow!

They refused to pay the thousand guilders and ended up paying a much higher price when the Piper led all their children away. Right now, we're acting like that Mayor and Corporation. We're not willing to pay the price of an immediate transition to a low-carbon economy. Our children and grandchildren will pay a very heavy price. As extreme weather events become daily fare, oceans acidify, and sea levels rise, many will pay with their lives.

We have to pay the piper, dance with the one who brought us.

We can't argue with Mother Nature, but we can, and must, side with ecologists against economists.

H/T David Oertel for noting that the economy is the Pied Piper.

Snippet from the Transformation tab.

China estimated it may spend $373 billion on projects for conserving energy and reducing emissions in the five years through 2015. The State Council announced a plan to reduce by 2015 the amount of energy it uses to produce every unit of gross domestic product by 16 percent from 2010 levels. In the five years through 2015, China is aiming for energy savings equal to 670 million tons of standard coal equivalent energy. Source: Bloomberg.
Posted by Gillian King at 2:29 PM 4 comments: 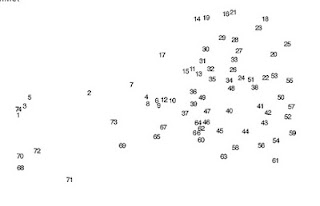 Climate scientists connected the dots on changing weather patterns decades ago. They warned that the planet was warming and the consequences would be catastrophic. Many governments paid attention and began to implement policies to reduce their greenhouse gas emissions. Then vested industry groups began campaigns of misinformation and doubt that obscured the picture and prevented many from connecting the dots.

Right now, the extreme weather events of the past 12 months are causing more people to connect the dots between record-breaking weather events and the long term trend of climate change. For many, the picture is emerging more clearly.

This new awareness will be leveraged by 350.org's Connect the Dots campaign that encourages grassroots events on 5 May 2012 around the world.


Climate Impacts Day is a global day of action taking place on May 5, 2012. On that day, we will issue a wake-up call, and connect the dots between climate change and extreme weather. We will educate, protest, create, document, and volunteer along with thousands of people around the world.


You can use their event finder to locate an event near you, or to start your own event.

See Bill McKibben's articulate 'Connect the Dots' piece in the Washington Post.
Posted by Gillian King at 2:10 PM No comments:

Email ThisBlogThis!Share to TwitterShare to FacebookShare to Pinterest
Labels: 350, climate change, dots, event
Older Posts Home
Subscribe to: Posts (Atom)
Living in the harbour city where the bridge is the 'coathanger' and a blocky new harbourside building was dubbed the 'toaster', I know the power of a visual metaphor.