Rapunzel, Rapunzel, let down your hair 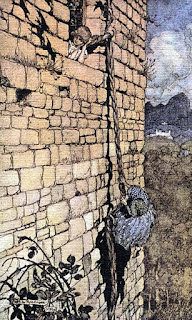 Picture us in our separate towers, or bubbles, or bunkers, facing off against those with different views. The longer we stay in our tower, the more isolated we become and the less we are able to communicate with people outside our tower.

Unfortunately, we're not likely to get broad support for the rapid decarbonisation of the economy if we stay in our towers throwing missiles at those with other views.

The climate debate has been so acrimonious at times that I'm sure Richard Betts feels like Kofi Annan in a meeting with Syria's Assad. Kofi Annan knows that if diplomacy is to be effective, Rapunzel has to reach out to the witch and be nice to her.

Of course, something is required from the witch as well. If she waltzes in and trashes the place, it's not very constructive. The trouble is – being unconstructive is an effective strategy for some vested interests.

Industries with big investments in fossil fuels don't want economies to decarbonise. They prefer that society is divided into separate camps that are busy arguing, persuading, negotiating.

In the same way, it seems to suit Assad to host yet another visit from Kofi Annan, to prolong negotiations, agree to a cease fire, and then to carry on killing his citizens. Why does Kofi Annan keep doing it? Because until someone intervenes with firepower, diplomacy is the only game in town.

With climate change, the different towers will continue to play out their game until the evidence before our eyes causes contrarian towers to crumble. A good section of the Heartland Institute tower crumbled away this month. No Rapunzels were involved, just a stealth attack and a Unabomber own goal.

One of the most compelling pieces of evidence of damage caused by CO2 emissions is the acidification of the ocean.

A recent report from EPOCA (European Project on Ocean Acidification) observes that ocean acidification is as high as it has been in 800,000 years. This is because the oceans have absorbed 30% of the CO2 humans have pumped into the atmosphere over the past 150 years.

In absorbing those emissions, the oceans have buffered humanity from the worst effects of a warming planet. This protection has come at a price as oceans become increasingly hostile for many of the little creatures at the bottom of the marine food web. In more acidic oceans critters relying on calcium carbonate for a home  – from corals to mollusks to the sea snail – have a harder time manufacturing their shells.

If snails, corals and mollusks collapse, entire ecosystems threaten to literally crumble away. Coral reefs support about 25% of all marine life, while sea snails account for more than 45% of the diet of fish like pink salmon.

Here's a 6-minute video that shows how all marine life depends on the pH value of oceans. Who'd have thought that oysters are not just for eating?

Posted by Gillian King at 12:41 PM No comments:

A life tenancy with a full repairing lease


In Britain, many commercial premises are let on leases that require the tenant to pay for routine property maintenance. This is called a "full repairing lease".


I remember saying in my Royal Society speech that we had a full repairing lease on this Earth. With the work done by the Inter-Governmental Panel on Climate Change, we can now say that we have the Surveyor's Report and it shows that there are faults and that the repair work needs to start without delay. The problems do not lie in the future—they are here and now—and it is our children and grandchildren, who are already growing up, who will be affected.


These are Margaret Thatcher's words when opening the Hadley Centre for Climate Prediction and Research in 1990.

As Margaret Thatcher pointed out, we don't own the earth, we are tenants who are responsible for its upkeep.

Like old buildings, the Earth doesn't negotiate about the work that needs doing.  If the roof leaks, you fix it or take the consequences.


Treat the earth well: it was not given to you by your parents, it was loaned to you by your children. We do not inherit the Earth from our Ancestors, we borrow it from our Children.


Peter Sinclair allowed Margaret Thatcher to do the talking in this video (10 mins) that critiques the  Heartland Institute's "Murderers, tyrands and madmen" billboard and shows that Heartland has positioned itself at the extreme right. No wonder their sponsors are leaving them in droves.

Posted by Gillian King at 10:51 AM No comments:

Email ThisBlogThis!Share to TwitterShare to FacebookShare to Pinterest
Labels: conservative, earth, Hadley, lease, margaret-thatcher, peter-sinclair, proverb, repair
Older Posts Home
Subscribe to: Posts (Atom)
Living in the harbour city where the bridge is the 'coathanger' and a blocky new harbourside building was dubbed the 'toaster', I know the power of a visual metaphor.