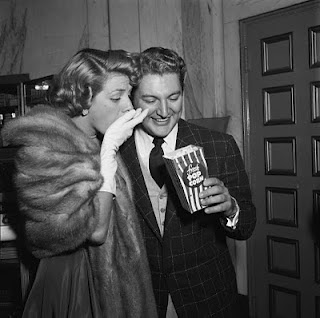 Ken Ward observes that when climate activists cry catastrophe! and then list benefits like green jobs and reduced oil imports to be gained if we take preventative measures, [it] is odd and confusing behaviour, like running into a crowded movie theater and shouting "Fire! -- and don't forget to buy popcorn on the way out, with all the unexpected traffic, it's on sale!".

This reminds me of one of my disappointments with Australia's current government. Despite heads rolling, it has succeeded in passing the Clean Energy Legislation that puts a price on carbon, compensates low income households and small businesses, and invests in renewables. In the weeks leading up to implementation, it ran an ad campaign about it. What did they say?

Did they mention that this legislation is a response to the catastrophe of climate disruption, like "We know the cinema is on fire, here comes the fire brigade!"

Did they say, "We're on the job, making Australia a safer place for future generations."

No, they ran ads of soothing domesticity that said, "You'll get some money. Aren't we nice?"

That's it. Nothing else. Indeed, they didn't even mention the legislation!

This is like addressing the crowd in the cinema and not mentioning the fire that has started in the projection room, saying instead, "There's a street parade outside they are throwing coins to the crowd."

Little wonder that Australians are disappointed and confused by their government.

Nevertheless, muddled as they are, the Government is better than the Opposition who have promised to undo the Clean Energy Legislation. That's like disbanding the Fire Brigade. I guess that their messaging is consistent. Given that they don't fully acknowledge climate disruption, it's like saying, "There is no fire so we don't need a Fire Brigade."

Eventually, all countries will get onto war footing to fight climate disruption. In the meantime, as individuals we can match our words and actions to the magnitude of the problem and call a spade a spade, as the very excellent James Hansen does in this Washington Post article today.

UPDATE: Researchers note that altruism and personal gain tend to cancel each other out. Appeals to self-interest can backfire and accidentally encourage people to behave selfishly in other areas. Source: NatureClimateChange. There's another reason that governments should encourage pro-environmental behaviour for the greater good and not just for personal monetary gain.

British supermarket chain Sainsbury has installed over 69,500 solar panels on its stores, laying claim to the title of Europe's top solar generator. The company said that it has 16MW of solar capacity spread across 169 of its 572 UK supermarkets, meaning that collectively the firm manages the largest solar array in Europe. Source: BusinessGreen
Posted by Gillian King at 11:29 AM No comments:

Email ThisBlogThis!Share to TwitterShare to FacebookShare to Pinterest
Labels: Australia, carbon-price, catastrophic, communication, fire-brigade, popcorn
Older Posts Home
Subscribe to: Posts (Atom)
Living in the harbour city where the bridge is the 'coathanger' and a blocky new harbourside building was dubbed the 'toaster', I know the power of a visual metaphor.