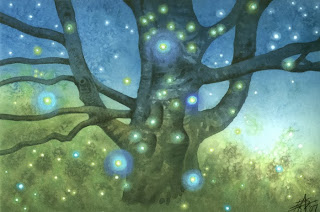 Has Ross Gittins been chasing will-o'-the-wisps? Today, he is full of regret that he has indeed been wasting time while the climate change elephant in the room got bigger and stronger. He concludes today's article:

Did I ever doubt that climate change represented by far the greatest threat to Australia's future economic prosperity? Never. Should I have said this more often, rather than chasing a thousand economic will-o'-the-wisps? Yes.

Oh, yes, Ross, we wanted you to speak up more than you did, even though we enjoyed and appreciated everything you wrote. For me, you're the full monty, nothing less than a National Living Treasure. But still, we wished you would be more forceful about the impacts of climate change. I even wrote you a Twitter message about it, and your gracious reply agreed with me.

Suddenly, I'm seeing a shift in opinion across the whole spectrum of climate change opinion. Everybody is moving to the 'more concerned' end of the spectrum. Not only are deniers becoming harder to find, but mild-moderates, like Ross Gittins and Alan Kohler, are becoming more serious and more vocal.

Perhaps it's the zeitgeist. Or the effects of extreme weather events like Australia's recent floods, fires and heatwaves, or superstorms like Sandy (USA), and super-typhoon Haiyan that devastated the Philippines.

There's no doubt that the efforts of Australia's new conservative government to undo current policies (policies that are already beginning to constrain carbon emissions) are causing the mild-moderates to speak out. Winning three 'Fossil of the Day' awards in the first week of the UN climate talks in Warsaw has also drawn attention to the bizarre policies of this government.

In essence, Australia’s LNG export boom and high domestic gas prices will make it very difficult for the Coalition to get re-elected if it sticks to current policies.

So, while deniers have been denying, moderates have mostly ignored the problem and got on with regular activities. Suddenly, things have changed. Abbott has won an election and whipped effective policy out from under us. Now moderates are worried. They realise that regular activities aren't so very important after all. They're distractions – will-o'-the-wisps that vanish in the clear light of day.

I look forward to reading Ross Gittins in the weeks and months ahead. What will it look like when he's no longer chasing will-o'-the-wisps?
Posted by Unknown at 6:42 PM No comments:

Email ThisBlogThis!Share to TwitterShare to FacebookShare to Pinterest
Labels: abbott, gittins, kohler, phantoms
Older Posts Home
Subscribe to: Posts (Atom)
Living in the harbour city where the bridge is the 'coathanger' and a blocky new harbourside building was dubbed the 'toaster', I know the power of a visual metaphor.