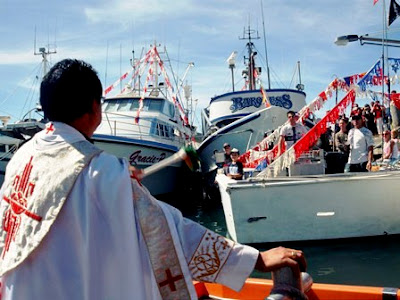 The ancient practice of blessing the fleet continues to bring comfort and ceremony to modern lives. This picture shows the modern fishing fleet in the small NSW town of Ulladulla getting its annual belssing. Apart from being a tourist attraction, blessing the fleet is also an example of magical thinking like our little practices of 'touch wood', crossing fingers, careful references to the 'Scottish play', or religious prayer practice.

I don't mind the colourful ritual of fleet blessings because I know that these ceremonies do not displace laws that require ships to be sea-worthy, to carry adequate safety equipment and for crew to be suitably qualified. The real work of blessing the fleet is done by the lawmakers and bureaucrats who set standards and ensure the fishmen stick to them.

While lawmakers have been active in ensuring safety at sea, they have been quite lax in giving us laws that require greenhouse gas pollution to be curbed to levels recommended by the best scientists on the planet. In the case of recent droughts, bushfires, storms and flooding, all exacerbated by climate change, we have been left to rely on church prayers. In the recent 10-year drought in NSW,  church congregations prayed for rain every week.

These prayers had questionable effect on the drought and were remarkably useless at reducing a prime cause – Australia's greenhouse gas emissions. We continue to top the list of world's worst emitter at 19 tonnes per capita.

Under a business as usual scenario, the Bureau of Meteorology predicts that NSW will be 3-4C warmer by 2070. This will quadruple the number of extreme weather events like droughts, heatwaves, violent storms, floods and bushfires. Ocean acidification will wipe out fish stocks so the fishermen of Ulladulla won't need a blessing because they won't be going to sea.

One can only hope that these events trigger a mass outpouring of magical thinking in the form of prayer rallies. Perhaps that will inspire our legislators will get to work to address the root cause of the problem by enacting legislation to lower our greenhouse gas emissions. Fingers crossed.

The US has cut carbon emissions more than any other country in the world in recent years — down 7.7 percent since 2006.  By the end of 2012, US carbon emissions will be the same as in 1996. Reductions are due to lower oil use in the transport sector (linked to efficiency improvements, higher oil prices and the economic downturn which has cut vehicle miles travelled) and a substantial shift from coal to gas in the power sector. Source: Think Progress.

Posted by Gillian King at 5:43 PM No comments:

Email ThisBlogThis!Share to TwitterShare to FacebookShare to Pinterest
Labels: blessing, BOM, greenhouse-gases, magical-thinking
Older Posts Home
Subscribe to: Posts (Atom)
Living in the harbour city where the bridge is the 'coathanger' and a blocky new harbourside building was dubbed the 'toaster', I know the power of a visual metaphor.