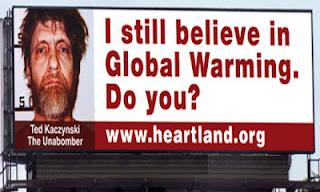 Climate change deniers claim that "the most prominent advocates of globabl warming aren't scientists. They are murderers, tyrants and madmen".

Do they mean it literally or metaphorically? Who knows?

They throw caution and logic to the wind as they unleash these blind and crude insults in a living example of the Climate Wars.

How to respond? This is not a time for reason, or for the finesse of metaphor. The most effective retaliatory action is to demand that responsible corporations withdraw their financial support from the offensive Heartland 'Institute'.

Forecast the Facts has an online petition saying:

You can add your name here. A previous Forecast the Facts petition was successful in getting General Motors to withdraw funding from Heartland, so there's a good chance that this petition will be effective too.

But only with your help!

And after you have done that, check out the parodies this foolish billboard has generated. Heartland pulled the billboard after 24 hours because it "angered and disappointed many of Heartland’s friends and supporters".  This lapse of judgement has associated them with the loony fringe and made them a figure of fun. Very satisfying. [You DID sign the petition, didn't you?]

UPDATE: Johnny Walker and Moet and Chandon owners, Diegeo, will no longer fund Heartland. (Why did they ever??)

Scott Mandia's open letter to his insurance company, State Farm, a Heartland donor, is eloquent and powerful.  Your letter can be as brief as a postcard. It only takes a postcard and a couple of sentences for customers to have an impact.

UPDATE: 8 May, State Farm announced on Facebook that: "State Farm is ending its association with the Heartland Institute. This is because of a recent billboard campaign launched by the Institute." They're getting lots of approving comments.

E&E Publishing report that this gaffe has cost Heartland hundreds of thousands of dollars from insurance companies and alienated key staff. They quote Brad Kading, president of the Association of Bermuda Insurers and Reinsurers, as saying:


The billboard just crystallized what the divide was. It just means the brand is tarnished and there really is no way to separate yourself without just leaving.

UPDATE 14 May: Eli Lilly, BB&T and Pepsi will no longer support the Heartland Institute. That brings the number of companies dropping Heartland to 11. According to Forecast the Facts, more than 150,000 citizens have weighed in against the organization’s messaging strategy. Board members, staff and 'Heartland Experts' have also left the organisation. Source: Climate Progress.

UPDATE 17 May: Peter Sinclair made this brilliant 11-minute video to debunk Heartland nonsense by presenting some of the key advocates for climate change since 1950s. The video is framed around Margaret Thatcher's key speech on global warming.

UPDATE 24 May: The Heartland Conference (an annual gathering of climate change deniers and disinformers — mostly hardcore libertarians — who attempt to spread doubts about climate science) was a washout. Cancellations and no-shows resulted in attendance of about 170, compared with 800 in some previous years. Heartland announced that they will not run the conference again.
Posted by Gillian King at 11:59 AM No comments:

Email ThisBlogThis!Share to TwitterShare to FacebookShare to Pinterest
Labels: heartland, madmen, murderers, petition, tyrants
Older Posts Home
Subscribe to: Posts (Atom)
Living in the harbour city where the bridge is the 'coathanger' and a blocky new harbourside building was dubbed the 'toaster', I know the power of a visual metaphor.