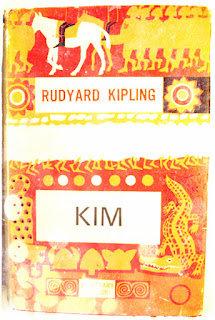 The Great Game is the setting for Rudyard Kipling's Kim, where Kim enters the world of superpower espionage along the North West Frontier of India/Pakistan/Afghanistan. It tells the story of a clever boy who gets caught up in the machinations of British and Russian imperial power.

In today's world, the Great Game has played out between countries fighting for control over energy supplies. Oil reserves have made the Middle East a hotbed of conflict, and wars have been fought in Kuwait and Iraq.

Like Kim, I am playing a role in the Great Game. Kim acted for one of the protagonists, but I have rolled up my sleeves to diffuse the situation.

With my solar PV, I am making fossil fuel reserves less important and not worth fighting over.

In Australia in August 2011, solar PV contributed 2.3% of total electricity production, and capacity continues to increase dramatically. Commenters call this the democratisation of electricity. This occurs when millions of homes and businesses have more control over their power production and consumption.

Democracy is about power, but it also has the moral dimension of fairness and justice. This is true whether it applies to political democracy, information democracy or electricity democracy.


The consumption of energy is no longer just an economic act—this is becoming a conscious act and an act of conscience. This will likely intensify in the coming years.

All our acts are moral acts. When we choose renewable energy over fossil fuels, we make powerful economic and moral statements.

When millions of us bring our actions in line with our moral compass, the world changes without benefit of politicians.

This has me thinking deeply and I'll write more about it tomorrow.


Via Elisa Wood at RealEnergyWriters.
Posted by Gillian King at 12:09 PM No comments:

Email ThisBlogThis!Share to TwitterShare to FacebookShare to Pinterest
Labels: democratisation, electricity, great-game, moral, rudyard-kipling, solar
Older Posts Home
Subscribe to: Posts (Atom)
Living in the harbour city where the bridge is the 'coathanger' and a blocky new harbourside building was dubbed the 'toaster', I know the power of a visual metaphor.