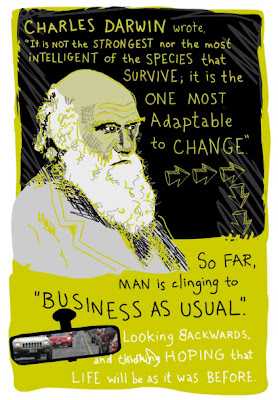 
It is not the strongest nor the most intelligent of the species that survive, it is the one most adaptable to change.

Many oral traditions have stories about those most adaptable characters – tricksters. American Indian cultures have Coyote, a trickster character characterized by paradox, duality, cleverness, shape-shifting, duplicity, and a knack for survival. Islamic cultures have the wise fool, Mulla Nasreddin.

Canadian artist Franke James gives reign to her inner trickster to produce delightful visual essays that advocate for action to address climate change. Here are some of her images. 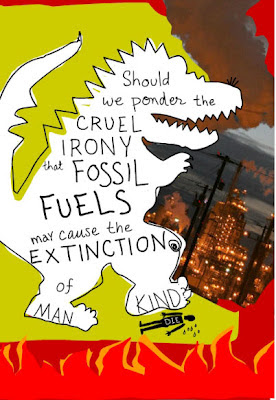 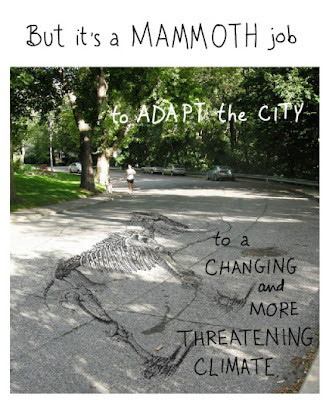 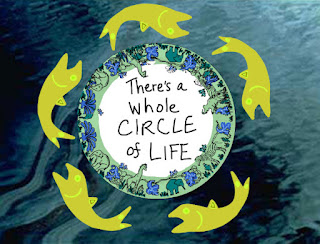 Are humans up to the job? Can we adapt to the changing climate in time? Or are we stuck in a Businss as Usual framework?

Perhaps we can take heart from news that Toyota Prius was the the world’s third best-selling car line in the first quarter of 2012. A sign of adaptation?

Take a minute to soak in the wonderfully creative visual essays of Franke James. And commune with your inner trickster to find ways that you can adapt.

Image Credit: All images are the work of Franke James.

Email ThisBlogThis!Share to TwitterShare to FacebookShare to Pinterest
Labels: adapt, charles-darwin, coyote, franke-james, nasreddin, prius, trickester
Older Posts Home
Subscribe to: Posts (Atom)
Living in the harbour city where the bridge is the 'coathanger' and a blocky new harbourside building was dubbed the 'toaster', I know the power of a visual metaphor.