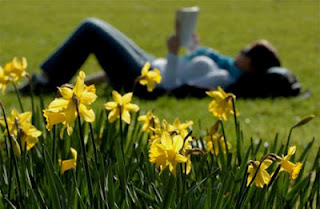 To say that an unusually cool summer debunks climate change is like saying that a cold patch in late April (or September in the Southern Hemisphere)  means that Spring is cancelled.

Or as Bill Maher puts it:


One major reason [people don't believe in climate change] ...  is that we had a very long snowy winter, which is the same as saying the sun is not real, because last night it got dark.


Mike Haseler fell for this error on his Scottish Sceptic blog.

Posted by Unknown at 7:34 AM No comments:

Email ThisBlogThis!Share to TwitterShare to FacebookShare to Pinterest
Labels: climate change, spring
Older Posts Home
Subscribe to: Posts (Atom)
Living in the harbour city where the bridge is the 'coathanger' and a blocky new harbourside building was dubbed the 'toaster', I know the power of a visual metaphor.