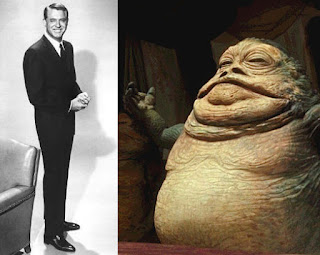 In Topsy Turvy Taxland, the government runs a tax system that encourages bad behaviour and then complains that people and corporations are behaving badly. This is a tax system run by Jabba the Hutt – dysfunctional, dictatorial and counter-productive.

It's a tax system that punishes work, encourages wasteful spending, and is too lazy to bother discouraging bad behaviour like smoking, gambling and polluting.

Tax reform gives Jabba the Hutt a makeover so he is more like Cary Grant. As you can see from the picture, it's a monumental task that is best achieved in small steps.

Australia's latest tax reform, the Clean Energy Legislation, continues a trend to move taxes away from those that penalise work towards taxes on expenditure. This is Cary Grant's way of encouraging citizens to work hard, save their money and spend wisely.

The previous tax reform in 2000 gave us the Goods and Services Tax (GST) which is a value-added tax of 10% on expenditure. In July this year the Clean Energy Legislation includes a tax of $23 tonne on major greenhouse gases. In 2015, this tax will change into a price that is integrated with world carbon markets.

This structural shift away from taxing income towards taxing expenditure is highly praised.


Other governments would do well to emulate and improve upon Australia’s efforts to shift the tax burden from hard-earned wages and profits to unearned rents and uncompensated harms.


On Sunday, the best climate policy in the world got even better: British Columbia’s carbon tax — a tax on the carbon content of all fossil fuels burned in the province — increased from $25 to $30 per metric ton of carbon dioxide, making it more expensive to pollute.


The authors ask, "Why tax good things when you can tax bad things, like emissions?" and they note that this principle is supported by  economists across the political spectrum, from Arthur B. Laffer and N. Gregory Mankiw on the right to Peter Orszag and Joseph E. Stiglitz on the left.

Economic theory suggests that putting a price on pollution reduces emissions more affordably and more effectively than any other measure. It is good policy.

In Topsy Turvey Taxland,Tony Abbott, our Leader of the Opposition, is promising to undo Australia's Clean Energy Legislation and remove the price on greenhouse gases when he gets into power. He'll have to increase income taxes so the government doesn't lose revenue, though of course he's staying mum about that part of his plan.

This will take us back to square one, to Jabba the Hutt as tax man supervising a system that lazes around, doing none of the heavy lifting required to reduce greenhouse gas pollution.

Mainstream climate scientists say that global warming is an urgent problem that should be tackled head on with gusto. "With gusto" means that our tax system can't be lazy. It has to pull its weight.

We need Cary Grant on the job, not Jabba the Hutt lazing around.

Posted by Unknown at 7:41 AM No comments:

Email ThisBlogThis!Share to TwitterShare to FacebookShare to Pinterest
Labels: cary-grant, emissions, jabba, NYT, policymakers, tax
Older Posts Home
Subscribe to: Posts (Atom)
Living in the harbour city where the bridge is the 'coathanger' and a blocky new harbourside building was dubbed the 'toaster', I know the power of a visual metaphor.