A lump sum or a magic pudding? 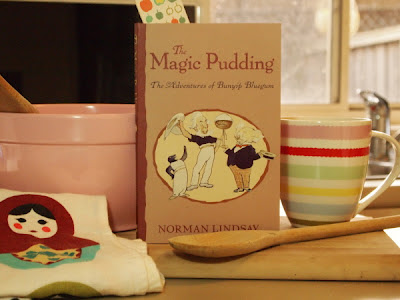 I had a friend, Miranda, who spent her income as she earnt it. Her view was that she would get another packet of money next week to replace what she spent this week. Just like Norman Lindsay's Magic Pudding that simply re-grew when part of it was eaten, her money was continually replaced with a fresh supply.

I was concerned that she would go into retirement with no savings and I figured that paying rent on the age pension is no fun. So I suggested that instead of thinking about her income as a magic pudding that got replenished each week, she should think of it as a lifetime allowance that is doled out week by week. Across her lifetime, she would earn a limited amount of money, and as each week passed there was one less portion awaiting her.

After that, she started saving. When she retired, she didn't have enough to live on, but she was able to buy a small apartment in a regional town and lived a modest and contented life on the age pension.

It seems to me that Western consumer societies have been living like Miranda, as though natural resources would be magically renewed year after year. But that is not the case. Like Miranda's lifetime income, many of Earth's resources are large, but limited.

With population due to expand by another 2 billion in coming decades, many of earth's resource budgets can only get tighter.

Fortunately, not all earth's resources are as limited as Miranda's lifetime earnings. Some resources renew endlesslessly in human timeframes. It's good to see countries beginning the transition to these magic pudding energy resources — sun, wind and geothermal.

By conserving our limited resources, we wisely give our children and grandchildren the opportunity to live fulfilling lives, instead of blindly devouring the lump sum of their inheritance.
Posted by Gillian King at 9:49 PM 2 comments:

Email ThisBlogThis!Share to TwitterShare to FacebookShare to Pinterest
Labels: finite-resources, magic-pudding, renewables
Older Posts Home
Subscribe to: Posts (Atom)
Living in the harbour city where the bridge is the 'coathanger' and a blocky new harbourside building was dubbed the 'toaster', I know the power of a visual metaphor.