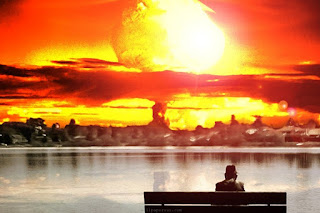 The heat contributed to the atmosphere over the past 15 years due to rising CO2 levels is equivalent to four Hiroshima atomic bombs per second. So said John Cook at the Climate Action Summit in Sydney this weekend.

That puts it in context, doesn't it?

It doesn't leave me feeling relaxed and comfortable. Not at all. Most of this added heat has gone into the oceans rather than into the atmosphere, land, glaciers, ice sheets or sea ice. 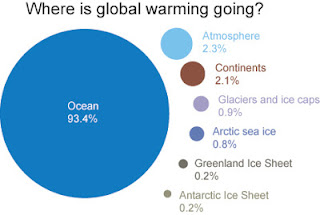 Ocean temperatures affect world weather patterns because they drive ocean currents.  It's one big planetary system, and we're pumping an extra four Hiroshimas of heat into it, every second.

There's no time for complacency, no time to be relaxed and comfortable. You're not sitting on the sidelines. You're right in the middle of this big planetary system. It's time to tell policy-makers that we want strong action to cut back from four Hiroshimas every second to zero.

Send your elected representative a letter today telling her/him that you care. If YOU don't speak up, they'll never know you care. Instead, they'll only hear the loud and persistent voices of oil, coal and gas businesses telling them that this isn't happening and people don't care anyway.

Coal India, the largest coal mining company in the world, will invest in solar power in order to reduce energy bills and to diversify. Unlike ExxonMobil, Coal India is preparing a succession plan for the post-carbon world.
Posted by Gillian King at 9:54 AM 1 comment:

Email ThisBlogThis!Share to TwitterShare to FacebookShare to Pinterest
Labels: CO2, heat, hiroshima, john-cook
Older Posts Home
Subscribe to: Posts (Atom)
Living in the harbour city where the bridge is the 'coathanger' and a blocky new harbourside building was dubbed the 'toaster', I know the power of a visual metaphor.