Stockholm - are we there yet? 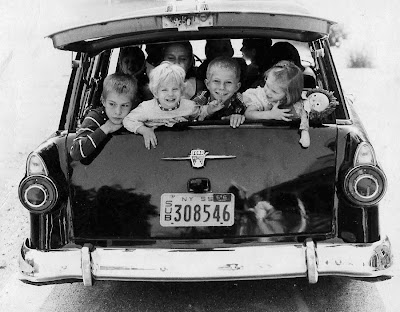 I remember being that whiney kid as we drove over dirt roads on our annual pilgrimage from Kingaroy to the Gold Coast or the Sunshine Coast. The four or five hour drive was eternity to me. Now, the dusty country roads have been paved with bitumen, and kids are easily entertained with portable DVD players. Even the 12 hour trip from Sydney to Brisbane doesn't generate quite the same bored queries about  arrival.

We creep, creep, creep along, hampered by billionaires protecting their dinosaur assets. I have to keep reminding myself that we will get there eventually. We have no choice but to make this journey.

The journey seems so fragile when leaders say we don't really need to go, or they make blood promises to dismantle the moderately effective vehicle we're travelling in, to replace it with a cobble-de-fudge of tokenism.

Then a government minister, Greg Combet, comes out with both guns blazing and stands up for this journey and the vehicle his government has crafted, and my hopes lift again.

Not that they lift to the point of asking, "Are we there yet?" I'm just pitifully grateful that the rickety vehicle is still lumbering forward.

So, I go and check out the Transformations tab to take heart from the vigorous actions that are underway worldwide. Once again, I see that we're not the only vehicle lurching along the pot-holed road. Instead I see hundreds of other vehicles of all shapes and sizes making the same journey. Countries, provinces, cities, corporations, individuals - it's an exodus, a flood of refugees abandoning the old dinosaur economy.

Some vehicles are bruised and battered, tied together with string, crammed with occupants arguing with each other. Others are robustly confident, cruising with aplomb towards their goal. Many are inward-looking, taking care of their own, but a few have tow-lines attached to little clusters of vehicles that have wheels but no engines. Not everyone has a tow line. Now and then, you see broken down vehicles on the verges. These poor vessels have no chance of making the journey. Will their passengers transfer, eventually, to other vehicles? Will someone take them in?

One of the most confident vehicles cruising in the vanguard of this cavalcade is Stockholm.  It is awash with advanced green technologies deployed to meet the long term target of carbon neutrality by 2050. It is well on the way to the first milestone in 2015 when it will use 100% renewable electricity and have per capita carbon emissions of 3 tonnes (c.f. USA at 22 tonnes).

Are we there yet? Already 80 per cent of all the buildings in Stockholm are connected to a district heating system largely fueled by burning the city's combustible waste.

But I'm ready. I'm making the journey. I'm asking, "When will we get there? Are we there yet?". I'm decarbonising. Got the solar panels. Got the greenpower. Replacing gas heater with heat pump. I'm not there yet, but I'm definitely on the road.

Stockholm is a low-carbon leader with strong initiatives across many areas. By 2015 electricity will be 100% renewable and CO2 emissions will be 3 tonnes per capita (c.f. USA at 22 tonnes). Most (80%) buildings  have district heat mostly fueled by the city's combustable waste. Sewage plants provide biogas for 6,000 cars, all municipal waste vehicles and some 300 buses. Stockholm is well on the way to being carbon neutral by 2050.  Source: BusinessGreen.

Posted by Unknown at 6:39 PM No comments:

Email ThisBlogThis!Share to TwitterShare to FacebookShare to Pinterest
Labels: dinosaur-economy, greg-combet, renewables, stockholm
Older Posts Home
Subscribe to: Posts (Atom)
Living in the harbour city where the bridge is the 'coathanger' and a blocky new harbourside building was dubbed the 'toaster', I know the power of a visual metaphor.