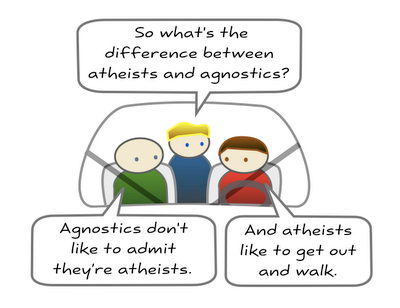 "I'm a climate agnostic", he said smoothly. It sounded so reasonable. Who is this guy, I wondered. Then I looked at his blogroll.  It featured Bishop Hill, Watts Up With That, Jo Nova, Jennifer Marohasy, Climate Audit and a few other stalwarts from the AGW denier echo chamber.

That didn't add up, so I pointed out that a genuine agnostic would have a few reputable science blogs on his blogroll. His response was to round it out with credible blogs like SkepticalScience, Real Climate and Tamino, and write a blog post showing that he has read them.

Of course this window dressing doesn't actually MAKE him agnostic on the topic.

The only people who can honestly claim to be agnostic on the topic of global warming are those who aren't familiar with the subject and don't give it much thought. You know the ones - they're the people who are busy juggling work and study and family, caring for loved ones, or deeply interested in other things. Maybe they can tell you the history of the Cavalier King Charles Spaniel and the breeding line for Crufts champions, but they don't pay much attention to climate change.

Anyone who looks honestly at the evidence will accept the basic facts:

An honest agnostic will quickly conclude that human activity is lifting CO2 levels and causing global warming. When they have decided this, they aren't agnostic any more.

When people who are familiar with the wide range of evidence  for AGW call themselves 'agnostic', they are claiming to be flying pigs - a logical impossibility. Perhaps they have an agenda and are wolves in sheep's clothing. Or perhaps their personal vanity simply enjoys the noble and expansive domain of 'agnostic' and they can't allow themselves to make a decision because they don't want to give up being so high-minded.

Agnostics are fence-sitters. They say they can't make up their minds. They tick the DON'T KNOW box on surveys. The words of Churchill before WWII apply to climate change agnostics,


They go on in strange paradox, decided only to be undecided, resolved to be irresolute, adamant for drift, solid for fluidity, all-powerful to be impotent.


Climate change deniers who adopt the agnostic position are often militant agnostics who say that NO ONE knows.

Being genuinely agnostic is an open-minded position, but it is very different from good faith scepticism. Good faith scepticism includes a readiness to engage with the data, whereas agnostics seem to stand back from meaningful engagement - maybe they are simply more interested in the pedigrees of spaniels.

A persistent agnostic or militant agnostic adopts a determinedly static position. It's a do-nothing stance taken by those who don't want to see action.

Some long-time climage change agnostics and sceptics do move on, but, like children who are late for school, they never seem to catch up properly. They seem to become 'luke-warmists' who accept that the globe is warming but claim that it's not happening quickly and we don't need to inconvenience ourselves by reducing carbon emissions.

People may like to call themselves agnostic because it gives them a noble respectability, but if they continue to spread misinformation under the heading "I'm a climate agnostic" it is a sly deceit.

The Transformation tab reports examples of progress towards a low-carbon future. Here is a recent snippet.

Private investors are putting almost $1 trillion annually into green businesses and technologies, bringing the total invested worldwide since 2007 to $3.6 trillion as of July 2012. Germany, Japan and the US lead in private green investments and China, Brazil and India lead among emerging nations. R&D investments are strongest in the automotive, semiconductor, and electrical components and equipment sectors. Source: SustainableBusiness.
Posted by Unknown at 11:49 AM No comments:

Email ThisBlogThis!Share to TwitterShare to FacebookShare to Pinterest
Labels: agnostic, denier, sceptic
Older Posts Home
Subscribe to: Posts (Atom)
Living in the harbour city where the bridge is the 'coathanger' and a blocky new harbourside building was dubbed the 'toaster', I know the power of a visual metaphor.