Not my grandmother's weather


When my Grandma Blanche was 70 years old, she came to visit me in North Queensland. She lived all her life in the coal mining villages and towns of Country Durham in the north of England. She was entirely used to the grey skies and bleak streetscapes of mining villages pictured in films like Billy Elliot and Brassed Off.

You can probably tell from her piled-up blonde hair and magenta lace dress that Grandma Blanche was not your usual storybook grandma. She had an appetite for life.

As you'd expect for somone who was a teenager in England in WWI, Grandma found North Queensland wonderfully strange and exotic.

Ingham is in the tropics at latitude 18 S which is about the same distance from the equator as Jamaica. It sits in the fertile Herbert River valley where sugar cane is the main crop. We showed her around the local sights – the cane fields, the river and the cemetery, famous for its elaborate Italian family graves.


My friend Ann and I took her along with us when the young men from the Sugar Mill invited us to a Champagne and Chicken Breakfast.  (It *was* the 1970s!).  After making merry on champagne and chicken and being very rude about one young man's brand new Holden Monaro, we drove home through the strange green light thrown by towering tropical storm clouds.

Just as we got home, large splats of rain started to pelt down, as big as eggs. We ran for the house – laughing, wet and a bit tipsy.

Then the heavens opened in a mighty downpour. Thunder crashed overhead and lightning zagged everywhere. We were glad to be indoors, safe from the deafening sound-and-light show. Grandma was a bit quiet.

Like most tropical thunderstorms, this one soon passed and sunlight sparkled on a wet world.

Then Grandma asked questions, and we realised that in all her seventy years she had never seen anything like it. We tried to get our heads around the different world she lived in. A world without thunder storms. She knew the quiet mystery of English snowstorms but she only knew of thunder storms from books and movies.

I think of my grandmother when I read scientists' predictions for future climate.


If we were to ... continue to burn our conventional oil, gas and coal supplies, concentrations of carbon dioxide in the atmosphere eventually would reach levels higher than in the Pliocene era, more than 2.5 million years ago, when sea level was at least 50 feet higher than it is now. That level of heat-trapping gases would assure that the disintegration of the ice sheets would accelerate out of control. Sea levels would rise and destroy coastal cities. Global temperatures would become intolerable. Twenty to 50 percent of the planet’s species would be driven to extinction. Civilization would be at risk.

Just as I had to work to get my head around the idea that someone could live their whole life without experiencing thunderstorms, so I also have to work to envision the inevitable climate change future. It's not a theory, it is a direct consequence of burning fossil fuels.

The coal mines of Country Durham fueled the Industrial Revolution. My Grandma lived opposite the first-ever passenger railway station. My ancestors dug that coal and worked on the world's first railroads. 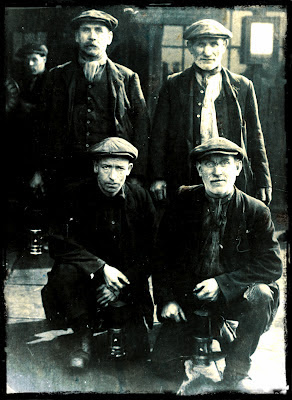 Durham's coal mines are closed now because the coal has been used up. We are staring at a situation where working coalmines all over the world will need to close in order to reduce carbon emissions.

It is 25 years since Grandma Blanche died, and already world weather is not the weather she grew up with. If we don't reduce carbon emissions, Grandma Blanche's descendents in County Durham won't have to travel half-way around the world to experience tropical thunderstorms. They'll get them at home, and the tropics will be uninhabitable.


The cost of acting goes far higher the longer we wait — we can’t wait any longer to avoid the worst and be judged immoral by coming generations.

Posted by Unknown at 2:34 PM No comments:

Email ThisBlogThis!Share to TwitterShare to FacebookShare to Pinterest
Labels: coal, durham, grandma, ingham, james-hansen, NYT, storm, weather
Older Posts Home
Subscribe to: Posts (Atom)
Living in the harbour city where the bridge is the 'coathanger' and a blocky new harbourside building was dubbed the 'toaster', I know the power of a visual metaphor.