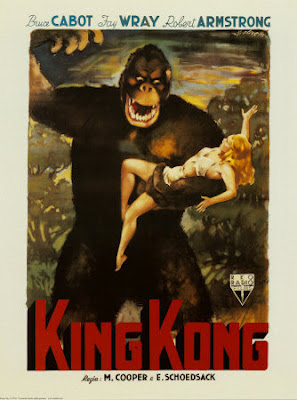 “Hug the monster” is a metaphor taught by U.S. Air Force trainers to those headed into harm’s way. It's a technique that helps individuals act constructively in terrifying situations by channelling their fear into action. Without a technique like this, fear can be paralysing.

Bill Blakemore on Nature's Edge, an American ABC News blog, uses the metaphor to observe that in recent years scientists and media have held back from talking about the dire consequences of unmitigated climate change. Perhaps the denier tactic of labelling honest discussion as 'alarmist' was a factor, and perhaps there was some concern about public levels of anxiety or panic.

To avoid the unpleasant, scary bits, the strategy has been to focus on the upside of mitigation and adaptation strategies, also call bright-siding. In this approach (there's an example here) the focus is on clean energy jobs, greater efficiency, and fuel security.

Michael Tobis sketched this schematic in 2010 to illustrate the discrepancy between informed opinion and public discourse.

Blakemore observes that the avoidance phase seems to be coming to an end with a turn towards more realistic discussion.


Established scientists, community and government leaders and journalists, as they describe the disruptions, suffering and destruction that manmade global warming is already producing, with far worse in the offing if humanity doesn’t somehow control it, are starting to allow themselves publicly to use terms like “calamity,” “catastrophe”, and “risk to the collective civilization.”

Of course, climate scientists have been 'hugging the monster' for the decades they have been working to collect the  evidence. Over time, they have come to recognise the catastrophic consequences of BAU climate change. Recently, their sense of urgency has increased and scientists like James Hansen and Jason Box have become activists, getting arrested in protests against fossil fuel mining.

I couldn't maintain my self-respect if I didn't go. This isn't about me, this is about the future. Just voting doesn't seem to be enough in this case. I need to be a citizen also, because this is a democracy after all, isn't it?

Jason Box, climatologist at Ohio State University, in the Guardian

Michael Mann's book about the The Hockey Stick and the Climate Wars reveals the tactics that have constrained public discussion and public policy.

David Spratt observes that bright-siding is a tactical mistake because it leaves out the most compelling reasons for action. Why bother with solar power at all if you aren't aware of the dire consequences of business as usual fossil fuel burning?

He notes that all great behavioural change campaigns have two elements, first they point to the downside of current behaviour and then they recommend a feasible behaviour change.

Now that the tactics of the denier camp are becoming more visible, thanks to books like The Hockey Stick and the Climate Wars and Heartland's own-goal with unsavoury billboards, we can look forward to more forthright talk about the consequences of climate change.

We'll need to fortify ourselves to be able to look realistically at what lies ahead. There are monsters to hug.

Posted by Unknown at 4:26 PM No comments: 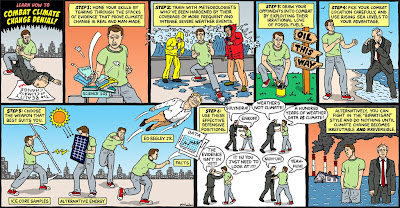 The differences between those who accept the mainstream science on climate change versus those who don't is most often characterised as a battle or war.

Michael Mann's latest book, The Hockey Stick and the Climate Wars: Despatches from the Front Lines gives a clear outline of the opposition he has met. The force of opposition, the dirty tricks and personal attacks certainly fit the metaphor of war.

A 2010 editorial in Nature famously acknowledged the 'no holds barred' nature of the attacks on scientists.


The integrity of climate research has taken a very public battering in recent months. Scientists must now emphasize the science, while acknowledging that they are in a street fight.

Both sides attack and defend as though their lives depended on it. And of course, they do.

The difference is that one side thinks everyone's life depends on it, while the other side seems to be looking after itself at the expense of others.

Posted by Unknown at 8:59 AM No comments:

Email ThisBlogThis!Share to TwitterShare to FacebookShare to Pinterest
Labels: climate wars, fight, hockey stick, michael-mann, war
Older Posts Home
Subscribe to: Posts (Atom)
Living in the harbour city where the bridge is the 'coathanger' and a blocky new harbourside building was dubbed the 'toaster', I know the power of a visual metaphor.