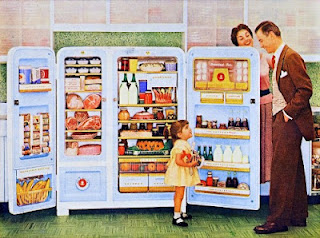 How does a warming Arctic cause winter cold in Europe and Northern America? Or, in other words, if the globe is warming, why the cold freeze?

It's because the Arctic refrigerator door has been opened and the cold air spilled out at the bottom, according to John Cook of Skeptical Science.

The refrigerator door is the jet stream that marks the differences in atmospheric pressure in higher latitudes (20N) compared with mid-latitudes (37-45N). This difference in pressure is measured by the Arctic oscillation (AO)  index or Northern Annular Mode/Northern Hemisphere Annular Mode (NAM).

NASA climatologist Dr. James E. Hansen explains the mechanism by which the AO affects weather at points far from the Arctic:

So warmer temperatures in the Arctic mess with the air pressure and this tends to make the refrigerator door swing open. Sometimes it just chinks open a little bit, other times it's like a teenager came to raid the fridge. That's when Europe really freezes!


Posted by Gillian King at 7:55 AM No comments:

Email ThisBlogThis!Share to TwitterShare to FacebookShare to Pinterest
Labels: arctic, james-hansen, john-cook, oscillation, refrigerator
Older Posts Home
Subscribe to: Posts (Atom)
Living in the harbour city where the bridge is the 'coathanger' and a blocky new harbourside building was dubbed the 'toaster', I know the power of a visual metaphor.