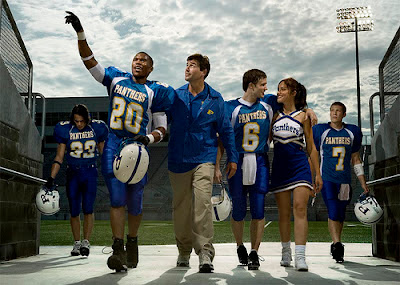 Last night we watched the much awarded Friday Night Lights on DVD. We're up to Season 3.

Landry dumped his cute little blonde girlfriend to take up with Tyra again. On again, off again, what will happen next?

And Smash got dumped from TMU, just a couple of episodes after all the drama about whether he would get attractive offers and whether he'd make wise choices. On again, off again, where will he end up now?

We don't know, we just follow along from episode to episode. But somebody does know. Somebody has a pretty fair idea about the overall story arc.

The writer, producer and actors have a general idea about the long narrative arc for the series and for its characters. Actor Jon Hamm knows that Mad Men is intended to run for another three seasons and knows how it will end. Of course, he's not saying.

In life, we go along day by day, episode by episode, writing the script as we go along.

Weather happens day by day too, and we get the impression that we can't know what lies ahead, other than assuming more of the same.

But that's not quite true. Climate scientists who study the long term patterns (the larger story arc) have a pretty fair idea of what is coming in the longer term. They can read the signs.


Oceans are now 30% more acidic than before the Industrial Revolution. The last time the oceans were as acidic as this was 65 million years ago. The acidity caused mass extinctions at the bottom of the food chain and the dinosaurs died out.

The last time carbon dioxide levels were apparently as high as they are today — and were sustained at those levels — global temperatures were 5 to 10 degrees Fahrenheit higher than they are today, the sea level was approximately 75 to 120 feet higher than today, there was no permanent sea ice cap in the Arctic and very little ice on Antarctica and Greenland.

Given their insider knowledge, and the future they are staring at, it is little wonder that climate scientists are taking a more active role in communicating the facts to policy makers and the general public.

We need our policy makers to have clear eyes – they need to look unflinchingly at the best scientific evidence.

They need to have full hearts – passion and commitment.

Then, indeed, we can't lose. 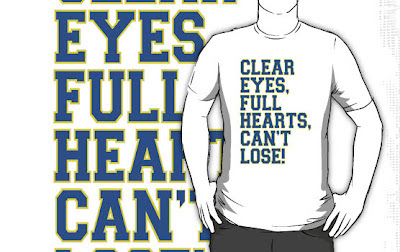 Posted by Unknown at 3:07 PM No comments:

Email ThisBlogThis!Share to TwitterShare to FacebookShare to Pinterest
Labels: acidification, aradhna-tripati, CO2, friday-night-lights, jon-hamm, policymakers, tim-mcclanahan
Older Posts Home
Subscribe to: Posts (Atom)
Living in the harbour city where the bridge is the 'coathanger' and a blocky new harbourside building was dubbed the 'toaster', I know the power of a visual metaphor.