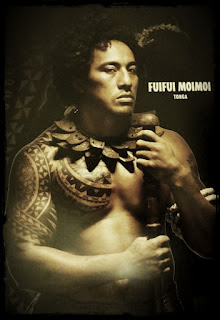 Are renewables too girly? Is energy efficiency too tame? Are EVs for milksops? Where's the challenge for the testosterone-endowed warriors in the silent acceleration of an electric car? What is big and bold about recycling and using LESS of something?

Social responsibility doesn't usually jive with a macho image and Edwin Stafford and Cathy Hartman argue here that climate communication needs to be more macho if it is to reach new audiences.

As an example, they note the success of the Don't Mess with Texas anti-littering campaign that reduced roadside littering by 72% in the first two years and went on to become  a cultural phenomenon.  The slogan has been popularly appropriated by Texans, appears on memorabilia merchandise and is even the official motto of the Virginia-class submarine USS Texas.

In my part of the world, tattooed Rugby League players are the epitome of macho. When tough Rugby League players like Tongan Fuifui Moimoi or Samoan Frank Puletua are aroused to defend their families they can wear shell necklaces and feather skirts and no one messes with them.


With his ever-accurate social radar, Bill Clinton put his finger on it recently when he said -


The more people with visible tattoos who advocate for clean energy, the more success it will have in Washington. You win the tattooed vote and we’ll have the damnedest environmental policy anybody ever saw.


While Texans are tough, nobody does 'don't mess with me' better than New Zealanders. The ancient Maori haka is presented before every Rugby Union game - check out this 2010 international game.

It's time for a climate haka.

It's time for machos with tattoos to carry green shopping bags with attitude.

It's time for tough men to stand up to defend their homeland so that no one messes with the future of their children and grandchildren.

The Chinese government has confirmed it has increased its target for solar energy by 40 per cent, pledging to deploy 21GW of capacity by 2015. The move is is accompanied by new minimum targets for renewable energy use that will be imposed on energy firms and grid operators, and means that renewables will account for 9.5 per cent of the country's energy mix by 2015. Source: BusinessGreen.