Eureka! It's a bathtub budget! 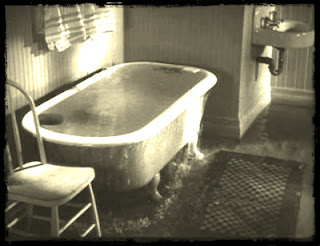 Similarly, the atmosphere can hold a limited amount of greenhouse gases (GHGs) before climate systems go crazy. It doesn't matter who puts them there, when there's too much we get climate catastrophe — droughts, ocean acidification, rising sea levels, storms and floods.

To stop the water spilling onto the bathroom floor, you have to turn the tap off. Even a small drip will cause the bathtub to overflow eventually. It's the same with the atmosphere, we will have to stop GHG emissions altogether or the climate system will go crazy. Carbon sinks don't work like a bath drain because they developed over millennia to balance the amount of natural CO2 emissions and they can't cope with the extra emissions humans have been putting out from fossil fuels. They can't drain it out as fast as we're putting it in, so the water level has been inching higher every year.

How soon do we need to turn off the tap and reduce our GHG emissions to zero? That depends on how close the bathtub is to overflowing. Is it half-full, or lapping the rim?

The best scientific advice is that the size of the GHG tub is about 350 ppm of CO2-e gases. This is a lot higher than the pre-industrial level of 280 ppm when the GHG bathtub was nicely balanced.  For thousands of years GHGs dripped into the tub and the leaky plug (carbon sinks that absorbed carbon dioxide) let them out  at the same rate. 350 ppm is higher and it will have some climate impacts, but they are likely to be manageable.

Right now, measurements of 400 ppm CO2 are starting to come in. This means that the tub is already overflowing. We have no time to waste to move to zero emissions as quickly as possible.  If we don't, we are driving headlong into catastrophe which guarantees that we'll have a big clean up job to do.

All our policies should be directed towards this bathtub budget. But how do we calculate our share of the bathtub budget? For social justice to prevail the only fair measure is to allocate a carbon budget for each per person on the planet. Based on 7 billion people, this works out to be about 5 tonnes of CO2-e per year (c.f. Serbia or Argentina). When world population has grown to the projected 9 billion, then our per-person budget will be 3.9 tonnes of CO2-e per year (think of Jordan or Turkey).

This means that Australia has to move quick-smart from something like 28 tonnes per person (the highest among OECD countries) down to 5 tonnes per person, and then be prepared to shave off a bit more.

Targets like "5% lower in 10 years time" aren't going to stop the bathtub from overflowing any time soon.
Posted by Unknown at 11:59 AM 6 comments:

Email ThisBlogThis!Share to TwitterShare to FacebookShare to Pinterest
Labels: bathtub, budget, CO2, justice
Older Posts Home
Subscribe to: Posts (Atom)
Living in the harbour city where the bridge is the 'coathanger' and a blocky new harbourside building was dubbed the 'toaster', I know the power of a visual metaphor.