Shell pisses in the swimming pool

Public swimming pools are used by everybody. Bad behaviour by even one person spoils the pool for everyone.

It's the same with the atmosphere. It is used by everyone and bad behaviour by a few are spoiling it for all.

We are travelling to our apres-carbon future and many of our good citizens are working to clean up the atmosphere at considerable personal expense and inconvenience. We are learning new habits, installing insulation, solar PV, putting on an extra jumper in winter, using the car less, trying Meatless Monday, and doing a thousand other things.

So it's not surprising that good citizens shake their fists at dirty corporates who piss in the pool. We won't be sedated with their platitudes because we are looking at actions not listening to lies.

And what do we see? We see oil companies rushing to drill for oil in the Arctic Sea now that global warming has cleared the summer sea ice. We see ExxonMobil spending $100million a day looking for new oil and gas reserves in hard-to-reach places.

They are looking for even more oil and gas that will pump heat trapping gases into the atmosphere. They're pissing in the pool.

One day, this will be illegal. Right now, perpetrators can piss in the pool with no cost other than occasional outbursts of scathing fury or a small levy in those jurisdictions with carbon pricing.

The pool is getting skanky and becoming a health hazard.When it gets to be a festering swamp of disease, perhaps legislators will declare it illegal to piss in the pool, and we'll be willing to pay any price to purify the water so it is safe again.

Netherlands. Researchers at Utrecht University have developed a catalyst that enables the production of plastics from wood-based biomass using waste such as branches, plant stalks and prunings. They have produced bioplastics with the same characteristics as petroleum-derived plastics. No special facilities or technology are needed to produce biomass plastic as it uses current technology. The new catalyst sets the stage for plastics manufacturers to produce no-carbon plastics. Source: PackagingProfessional.
Posted by Gillian King at 11:14 AM No comments:

How much air in the tank? 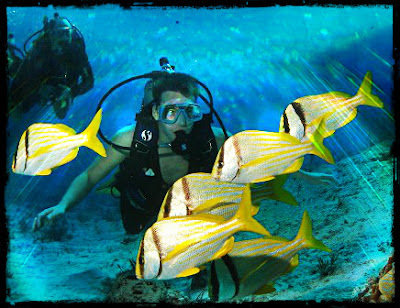 Scuba divers pay a lot of attention to the amount of air in their tank. Their lives depend on it.

Scientists have calculated how much more CO2 we can add to the atmosphere and still stay within the limit of 2C warming. They calculate that the atmosphere can hold an additional 565 GT (gigatons) of CO2.  Two degrees centigrade is the target that world nations have agreed upon as a target. Scientists say this will give a 50% chance of avoiding the worst consequences of global warming.

Two degrees is not a get out of jail card, with 2C we have 100% chance of getting all the serious consequences of global warming (increased drought, heatwave, flooding, ocean acidification, storms and floods, and rising sea level) as well as a 50% chance of copping the very worst (massive loss of arable land, loss of coastal cities, mass species extinction, runaway global warming).

565 GT is the equivalent of about 15 GT a year between now and 2050. However, the IEA reports that the world emitted twice as much last year (31.6 GT in 2011) and the trend is rising. These figures give rise to two thoughts:
When a scuba diver's tank is running low, they don't ignore it ("Faulty dial, always lies"), or negotiate with it ("Come on, tank, give me another 30 minutes and I'll give you a shiny hologram sticker to make you look pretty.") or threaten it ("Give me more air or I'll kill your wife and children. I know where you live.")

It's the same with 565 GT. We can't ignore it or try to negotiate or threaten it. Yet this is exactly what the fossil fuel industry is doing. They are sitting on current known reserves of coal, oil and gas that would pump 2,795 GT carbon dioxide into the air if burnt. And they are busily looking for more - ExxonMobile spends $100 million every day on exploration for new reserves.

With a limit of 565 GT, the remaining 80% (2,230 GT) will be left in the ground as stranded assets unless carbon capture becomes economically viable.

The new Laggard to Leader report from Beyond Zero Emissions asks Australia to take the lead in recognising that 80% of the world's fossil fuel reserves cannot be used by putting a moratorium on new coal exploration and mining. Australia currently dominates world coal with 27% of all trade so our actions can have a big impact.

When Australia stops expanding its coal industry it will be like the scuba diver who recognises his tank is getting low and starts heading back to the surface.  At that point we'll be swimming hard, hoping we make it in time to avoid catastrophe.

Saudi Arabia announced that it would install 41,000MW of solar over the next two decades (25,000 in solar thermal and 16,000 in utility-scale solar PV). The Saudis are not wasting time – there’s too  much money to be saved. The cost of the initiative is estimated at $100 billion, but it is estimated to save 523,000 barrels a day, or more than $19 billion a year at current oil export prices). This month the Saudis announced that the first of their solar auctions, totaling 2,000MW, will be held early in 2013. The second round of 2,500MW will be held in 2014. Source: Reneweconomy.

Posted by Gillian King at 10:36 AM No comments: 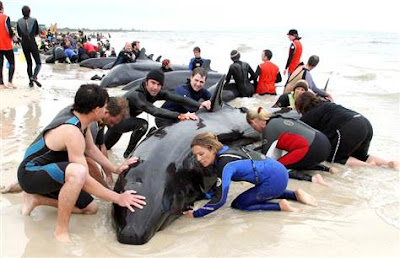 A dead whale on the beach is big and smelly. It is no use to itself and it spoils the beach.  So when whales get stranded on beaches, hundreds of people turn up to help get them back to sea before they die and the beach is a stinking mess.

In a similar way, fossil fuel interests are fighting to prevent their coal, oil and gas assets from becoming stranded assets. Their main tactic is to dig up as much as they can as fast as they can, before the world cottons on and puts strict limits on greenhouse gas emissions.

A report by the Carbon Tracker Initiative reveals the scale of climate risk. To limit the chances of exceeding the UN's agreed warming limit of 2C to 20%, the amount of CO2 that can be emitted between now and 2050 is 565 gigatonnes. But the known fossil fuel reserves declared by energy and mining companies is equivalent to 2,795 gigatonnes of CO2. That means, if the world acts on its climate change pledges, 80% of those reserves can never be burned and are stranded assets.

The IEA has said that if concerted action is not taken as early as 2015, then 45 per cent of the world’s fossil fuel plants would have to close early over time to meet the 2°C scenario.

There is growing risk that money invested in coal mines, oil, tar and gas reserves, and their associated pipelines, train lines, ports and shipping facilities will be closed before their productive life is realised. They will become pipelines and train tracks to nowhere.

Banks and investment funds are beginning to take climate risk into account in judging whether or not to invest in big new fossil fuel infrastructure. Experts warn that the huge reserves of coal, oil and gas held by stock exchange-listed companies are ''sub-prime'' assets.  HSBC says that the declining ceiling of allowed emissions intensity should force more capital into lower carbon technologies.


As the urgency increases, we expect more banks and institutional investors to factor 2°C targets into their financing decisions.

Countries like Canada are strenuously resisting efforts to count the carbon cost of their fossil fuel reserves. Canada is resisting EU initiatives to account for the higher carbon footprint of their tar sands compared with regular oil. They fear that their tar sands will be stranded as uneconomic assets if the true cost was recognised.

In contrast, countries like Ecuador recognise that their oil reserves are valuable if they are NOT tapped. They are  seeking payment for not drilling in the Yasuní National Park which is regarded as one of the most biodiverse places on Earth. They have asked for $3.6 billion, about half the estimated value of the reserves, to leave the oil in the ground and protect the Yasuní.

In effect, Ecuador is trying to prevent healthy whales from beaching. In contrast, the vehement efforts of the Koch brothers and Australia's mining magnates, Gina Rinehart and Clive Palmer, to promote mining at any cost, will serve to drive more whales onto beaches and leave them stranded there.

Australian poet, John Blight (1913-1995), wrote this sonnet in the 1960s. It captures beautifully how hard it is for humans to care about very big subjects, even if they are potentially devastating.


Death of a Whale
When the mouse died, there was a sort of pity;
The tiny, delicate creature made for grief.
Yesterday, instead, the dead whale on the reef
Drew an excited multitude to the jetty.
How must a whale die to wring a tear?
Lugubrious death of a whale; the big
Feast for the gulls and sharks; the tug
Of the tide simulating life still there,
Until the air, polluted, swings this way
Like a door ajar from a slaughterhouse.
Pooh! pooh! spare us, give us the death of a mouse
By its tiny hole; not this in our lovely bay.
-- Sorry, we are, too, when a child dies:
But at the immolation of a race, who cries?

Posted by Gillian King at 6:57 AM No comments:

Email ThisBlogThis!Share to TwitterShare to FacebookShare to Pinterest
Labels: carbon-tracker, coal, emissions, gas, koch, mining, oil, stranded asset, whale
Older Posts Home
Subscribe to: Posts (Atom)
Living in the harbour city where the bridge is the 'coathanger' and a blocky new harbourside building was dubbed the 'toaster', I know the power of a visual metaphor.