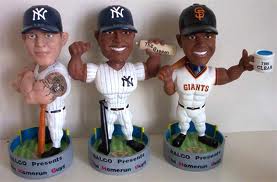 Steroids won't guarantee that a baseball player hits a home run every time, but the drugs increase the chances of hitting more home runs across the whole playing season.

NCAR/UCAR has a great resource page framed around the baseball on steroids metaphor. Among the goodies, they offer this two minute cartoon video explanation.

Jeff Masters, a meteorologist and cofounder of the Weather Underground, describes global warming as like putting the atmosphere on steroids.

He uses this analogy in this PBS interview in the broadcast  “How 2011 Became a ‘Mind-Boggling’ Year of Extreme Weather” that aired on on 28 December 2011.


Watch How 2011 Became a 'Mind-Boggling' Year of Extreme Weather on PBS. See more from PBS NewsHour.


And for those who think climate change has nothing to do with baseball, take a look at this graph of globabl temperatures and home run rates. Correlation is not causation, but...  The graph is discussed in this Washington Post article where climatologist Michael Mann is quoted as saying that the carbon emissions behind climate change may lower home runs. “If anything, anthropogenic carbon emissions and global warming should make the atmosphere slightly heavier, because we’re taking carbon that was trapped in the solid earth and releasing to the atmosphere (in the form of CO2), and a warmer atmosphere will hold more water vapor. Both CO2 and water vapor contribute (slightly) to the mass of the atmosphere.”


We need to start taking the steroids out of the system by reducing greenhouse gas emissions.
Posted by Gillian King at 11:46 AM No comments:

Email ThisBlogThis!Share to TwitterShare to FacebookShare to Pinterest
Labels: baseball, steroids
Older Posts Home
Subscribe to: Posts (Atom)
Living in the harbour city where the bridge is the 'coathanger' and a blocky new harbourside building was dubbed the 'toaster', I know the power of a visual metaphor.