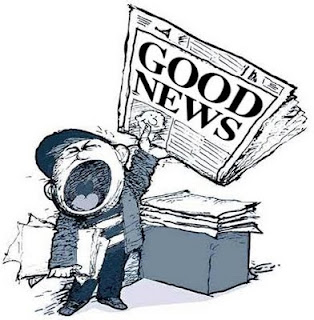 What's the good news story about climate change? For me, it is the exciting transition to a low-carbon economy.

The new low-carbon world will benefit billions of people by:
And of course the switch to a low carbon economy will prevent the worst excesses of 'business as usual' climate change.

Right now I can add to my rooftop solar PV for about $4,000 and eliminate electricity bills. Forever. It will take four years to recoup the $4,000 investment, after that I get free electricity.

I look forward to the first plug-in hybrid cars. They will eliminate my petrol bills except for occasional long trips. My current Prius saves me $1,000 a year in fuel bills, compared with my previous car.

I also want to see solar and wind power in the poorest countries – funded by carbon offset programs. A quarter of the world's population does not have electricity at all. I want them to get clean power.

What's YOUR good news story?
Posted by Gillian King at 6:21 AM