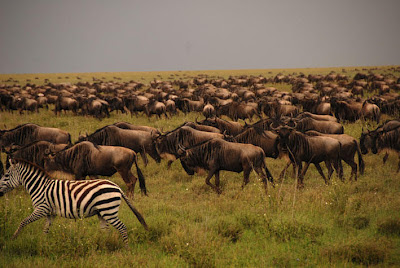 Lions hunting on the Serengeti stand at the edge of a herd and pick out a single individual, then they hunt as a group to separate the individual and bring it down.

In his book, The Hockey Stick and the Climate Wars, Michael E. Mann says that climate change deniers use the same tactic. There are thousands of climate scientists working in a range of fields including meteorology, atmospheric physics, oceanography, geobiology, cryospherics, paleoclimate, geology, etc, etc. It's impossible to attack the whole herd, there are too many of them and they are too strong. So deniers have focused on a handful of scientists and thrown everything at them.

Michael Mann and James Hansen are two prominent climate scientists who have been targeted by climate change deniers in attacks ranging from political enquiries and media scorn through to death threats to their families.

Luckily for us, they don't take it lying down. They continue to conduct research and communicate their findings. Fortunately, the wider science community is beginning to recognise the Serengeti Strategy and it is gathering forces to protect individual scientists who are singled out by the denier camp.  Two of these initiatives are the Climate Science Legal Defense Fund and the Climate Science Rapid Response Team.

The Climate Science Rapid Response Team locates relevant climate science specialists to answer questions or give informed interviews. This initiative puts journalists, politicians and citizens in touch with hundreds of credible scientists who know their stuff and can give timely responses.

The Serengeti Strategy doesn't work when it is recognised for what it is and when the herd acts decisively to protect those who are singled out for attack.
Posted by Gillian King at 10:31 AM