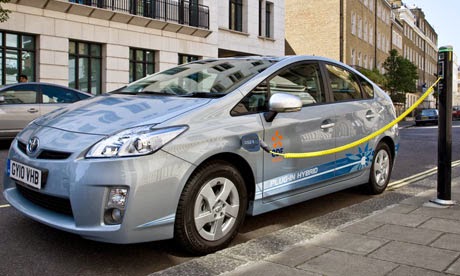 There are now more than 100,000 electric cars on America's roads. Two and a half years ago that number was just 345. That's an increase of 28,986% - a faster growth rate than Ebola which is currently doubling every 2-3 weeks.

This is a game-changer for transport and for electricity generation. Suddenly everyone realises that Elon Musk isn't in the transport business - he's in the battery business. His Tesla car was just a stepping stone to a much bigger idea - the idea that storage is the holy grail of clean energy.


Elon Musk’s plans to develop the Gigafactory are one of the most exciting stories around. He's putting himself front and centre of this move to use solar as a reliable source of power for everything from cars to aircraft. Everyone is going to need batteries. Tesla's plans to disrupt a trillion dollar car industry as well as a trillion dollar electric utility industry, stops and starts with producing cheap battery packs that allow solar energy to be discharged at night. No question, Musk has his eyes on more than cars. The car market is just the first hurdle.

Until now, discussion about the transition to clean energy has mostly been locked up in the domains of environment or science/technology, so it's great to see it spreading to the area of finance and investment. Now I want to see these discussions spread further and occupy space in domains like health, justice and economics.

As they say, the Stone Age didn't end because they ran out of stones. Right now the Age of Coal is ending - and it's not because we've run out of coal. It's because something better has come along.

How do we stop things that spread exponentially? Governments are committing a lot of resources to stop the spread of Ebola. Similarly, incumbent industries are trying to hold back the flood of clean energy technology. Smart governments need to prevent this.
The US government worked with the car industry to announce policies that will limit CO2 emissions from cars. With the car industry onside and sensible policy settings, electric vehicles are thriving in America.

In Australia it's a very different story. Australia's clean energy uptake is struggling against the headwinds created by incumbents supported by national and state governments that prefer to stay in the Stone Age.
Posted by Gillian King at 10:38 AM