The Journey of Possum and Sugar Glider (1) 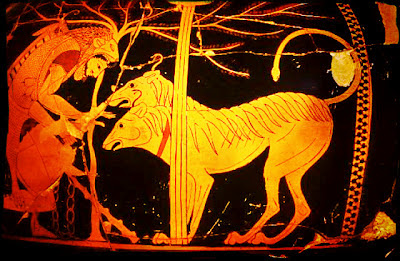 A Fable for Our Times

The traveller asked the guru how to find Nirvana. The master replied, "You need to reduce your carbon emissions below 4 tonnes per year. Then you need to persuade all your countrymen to do the same. After that, you need to persuade the whole world. If you fail, your comfortable life will be taken away and your children and grandhildren will live in chaos and darkness unto the seventh generation."

Our hero shook his head and replied, "As soon ask a camel to pass through the eye of a needle. You ask too much."

The master said, "You have only to start the journey. You will find help along the way. Even Hercules, with all his strength did not achieve his 12 Labours without help from the gods, his companions and those who had journeyed before him. Even his enemies helped."

So the hero put on his shoes and set out. Afterall, he wouldn't be a hero if he didn't, would he? This is an account of the obstacles he met along the way, and how he overcame them.

Our hero – who we will call Possum because he was small and weak, not at all like Lion or Rhinocerus  or Eagle — sat by the side of the dusty road and wondered how to start. His eyes got a bit damp and he felt very sorry for himself.

The swallows swooped in the afternoon sun slanting through the tall trees of the eucalypt forest. His eye followed them as they circled and swooped. Then he saw a movement high in the leaf canopy and Sugar Glider came gliding down to land beside him.

Possum told her his story and added that he regretted asking the question about Nirvana because now the weight of the world was on his shoulders. Sugar Glider paused thoughtfully then she explained that the world was being destroyed and the guru had waited for years for the One who would come and ask the right question. Only the one with the question would be able to undertake the journey. "You knew the question, Possum, so the journey is yours," she said softly.

"Not quite," said Sugar Glider, "There are a few of us. Shall we travel together?"

So Possum and Sugar Glider went off to meet the others. Possum had a spring in his step and his tail curled brightly. He snuck sideways glances at Sugar Glider, admiring her grace as they chatted about Great Nature, Nirvana and the relative merits of nectar from grevillea and melaleuca.

With his new group of friends, Possum sometimes felt his head would burst as he learnt more and more about the danger the world was in.

He already knew that there were gases called greenhouse gases that stopped the earth from reflecting a lot of heat back into space. He knew that these gases gave the earth a nice warm blanket that made all of life possible. He knew that one was called carbon dioxide, but now he learned about others called methane, nitrous oxide, and ozone.

He learnt that the amount of carbon dioxide in the atmosphere was very small, only 280 parts per million (ppm). "That's like me," he thought, "Small, but powerful!" and he danced a little jig.

He learnt that the amount of carbon dioxide had shot up to nearly 400ppm in the past 150 years. With more greenhouse gases in the atmosphere, the planet was getting warmer.

He listened wide-eyed as Old Man Kangaroo described how forests had been removed from whole continents so there was less forest to soak up carbon dioxide. He heard how coal, oil and gas were mined and burnt to provide energy for electricity, heating, cooking, transport and plastics. These fossil fuels meant there was more carbon dioxide going into the atmosphere.

Dingo curled her lip and showed her teeth as she said that it wasn't just a matter of getting hotter, there would also be more droughts and more bushfires. "And the storms will be much fiercer, so there will be more floods," she growled.

Sugar Glider said, "Don't forget the oceans. They have absorbed some of the extra cardon dioxide and now they are more acidic than anytime in the last 800,000 years. The little creatures can't form proper shells in more acidic oceans, and if they fail the bigger fish will have nothing to eat. Everything will die if this continues."

That made Possum's head REALLY hurt!

3. THE MOST POWERFUL IDEA IN THE WORLD

Sitting around the campfire one night, the group of friends were telling stories. Snake told a story about Mr Einstein.


Mr Einsstein was one ssmart man. He thought big important thoughtss that no one had ever thought before. Mosst people couldn't undersstand his Theory of Relativity and many of thosse who did undersstand weren't ssure it was true. But hiss new idea turned the world of physsics upside down when new data showed it really wass true.

Mr Einsstein became the mosst famouss sscientisst in the world. One day Mr Einsstein was at a dinner party where he ssat next to a writer who was blowing hiss own trumpet about all the good ideass he had. He ssaid that he had ideass all through the day, and even at night. He kept a notebook with him sso he could write down his ideass. If he woke in the night, he wrote hiss new ideass in hiss notebook. After talking about his own cleverness, he ssaid to Mr Einsstein, "I ssuposse you write down your ideass too?"

Mr Einsstein thought a bit, then he said, "Actually, I think I've only had one idea in my life."

Everyone laughed when Snake finished the story.

Magpie said, "That reminds me about something else Mr Einstein said."

Everyone wanted to hear, so Magpie went on.


When Mr Einstein was an old man, someone asked him, "What is the most powerful idea in the world?" Mr Einstein thought a bit and said, "Compound interest."

No one laughed this time. Echidna looked puzzled, "Why is that? Why did he say that?"

Echidna asked, "Is that like reducing carbon emissions? If we start reducing them now, the debt we leave to the next generation will be smaller? But if we keep adding more carbon to the atmosphere, and more every year, the amount will be too big for our children and grandchildren to pay?"

Possum was listening carefully, "It sounds like we should start straight away, so we don't get caught by compound interest. Does it matter how much we pay?"

"Well, as a first step, even small payments make a difference when they are made regularly," said Magpie.

She started the familiar song, and soon the small band of travellers were singing along. Possum smiled as he listened for Sugar Glider's sweet voice mingling with the others.